One match each month to feature different theme and promotion. 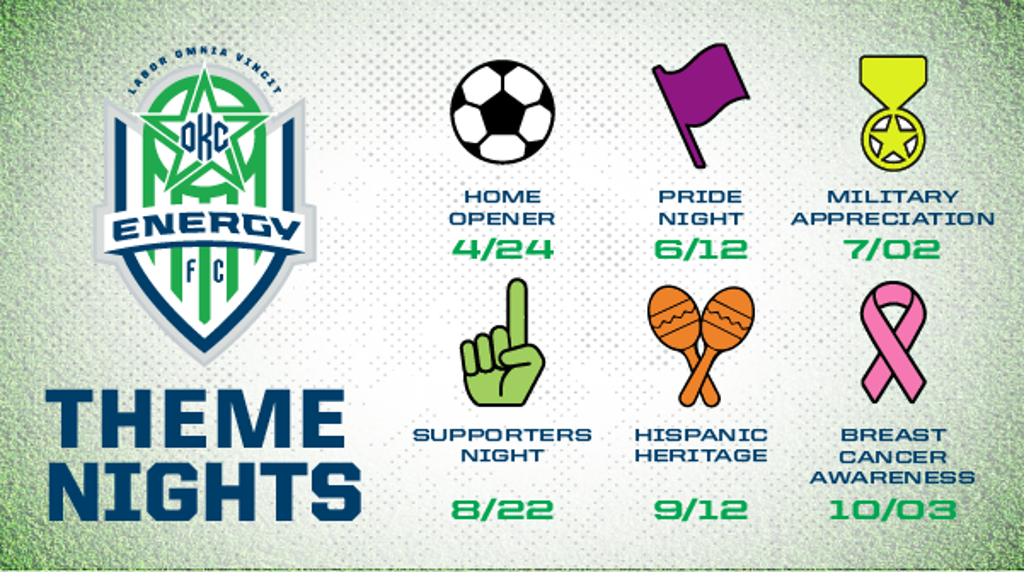 OKLAHOMA CITY – Energy FC today announced the theme nights for the 2021 season. The club will highlight one match each month which will include promotions to raise awareness, offer giveaways and create unique merchandise.

“We feel one of the best parts of live soccer is the matchday experience," said Billy Walton, Energy FC Director of Marketing and Communications. “Having a theme to celebrate special causes or people in our community just adds that extra layer of uniqueness to the experience.”

The club kicks off the 2021 season against rivals FC Tulsa in the 21st Black Gold Derby. The first 1,500 fans in attendance will receive a co-branded SSM Health St. Anthony and Energy FC face mask. Jazz saxophonist Vearl T will begin the night with a special rendition of the national anthem, and the match ball will be presented by distinguished guests from SSM Health St. Anthony.

Matchday activations will include various displays of support for the LGBTQ+ community. Special merchandise will also be available with a portion of the proceeds benefitting OKC Pride. Additionally, the club will participate in the OKC Pride Parade on June 25.

The longest-running annual theme night for Energy FC. There will be matchday recognition to honor those who have served their country including on-field flag display, color guard and more. Special merchandise and military discounts will also be available.

This will be held in conjunction with the USL Supporters Week. The loyal fans who support the team through thick and thin will be featured and special discounts on merchandise will be offered to Season Seat Members. Additional details regarding activations involving USL Supporters Week will be forthcoming.

The club will honor the Hispanic community with a variety of celebrations. Details and guests are still being booked. More information will be available at a later date.

The club will highlight various individuals to help raise awareness.  Additionally, the pink Electric City kits will be worn all month and additional matchday elements will be highlighted in pink to draw attention to the cause. More information involving a potential partnership activation with SSM Health will be forthcoming.

*More details as well as additional promotions and giveaway items for theme nights to be announced at a later date.

Season Seat Memberships, Boost Plans, Group Experiences and single game tickets for the home opener, as well as all theme nights and the remaining matches on the schedule, can be found at energyfc.com/tickets.