How two cities, and one wrench, came together to create an instant rivalry 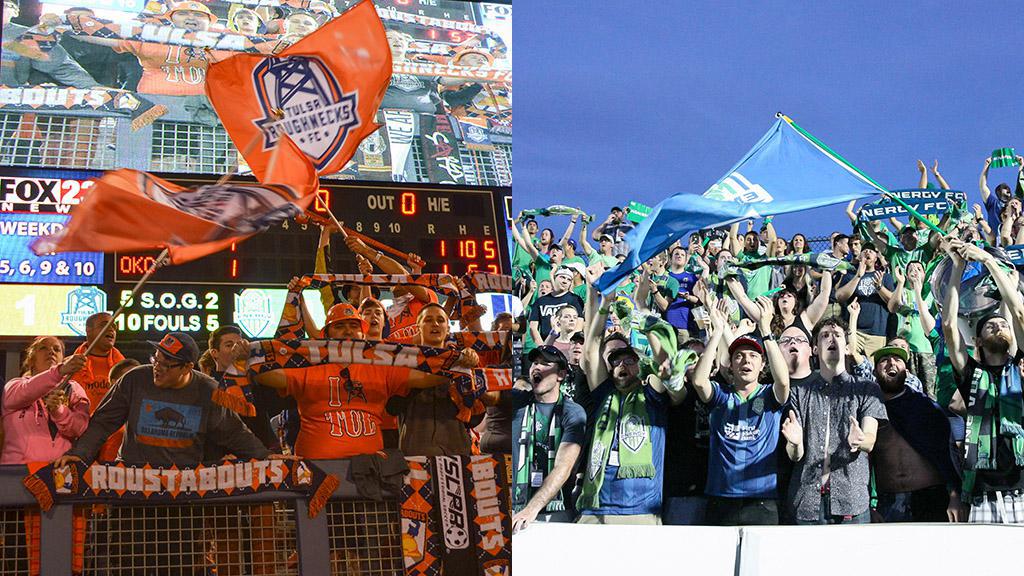 TULSA, Okla. – In general, rivalries and derbies do not develop overnight. It usually takes years of disdain and bad blood for two clubs to develop a meaningful rivalry.

For OKC Energy FC and Tulsa Roughnecks FC, though, the opposite has proven to be true.

Though these clubs have only been around for a short time, the animosity and competition between the two biggest cities in Oklahoma over the past century has helped usher in one of the USL’s most heated rivalries, the Black Gold Derby.

“Between Oklahoma City and Tulsa there is always a rivalry between the two cities,” said Joseph Pugh, President of The Grid. “It has been around as long as I can remember. With the two cities being the two biggest cities in the state, they just kind of have that natural rivalry of which city is better in general.”

The competition for prominence between the two cities dates to before Oklahoma’s statehood. The chase for both economic and cultural prosperity over the past 100 years between Oklahoma City and Tulsa carried over to sports almost immediately. The divide within the state is easily seen by the amount of support both state universities garner around the two cities; Oklahoma City harbors mostly supporters of the University of Oklahoma due to the short distance between the state capital and Norman, the home of OU, while many homes and businesses around Tulsa fly orange and black flags in support of Oklahoma State University, with its campus just over 60 miles east in Stillwater.

As a result, the Black Gold Derby has become an extension of the competition that has been taking place in myriad arenas between the two cities for decades. Fans from both sides took to it instantly.

“When soccer came onto the scene, I had hoped that the Energy would have a close rival,” said Pugh. “When Tulsa was finally announced, we immediately jumped all over it, hammering them on social media. Of course we didn’t let them live it down that our owner here, Bob Funk, is a minority owner of the team in Tulsa. We jumped on them for that.”

“Once Tulsa announced that they were going to have a USL club, there was a group a future Roustabouts who went down to cheer against OKC one match, and I think that kind of helped set it off,” said Tulsa Roustabouts Secretary Cody Bromley. “Finally playing each other was a big moment, and I think it cemented it there that it wasn’t going to be an easy match where one group just came in and beat the other.”

The rivalry officially kicked off on the first day of the 2015 USL season. The game also happened to be the Roughnecks’ USL debut. In front of a capacity crowd of more than 8,000 fans, the two clubs vying for supremacy within the state played to an entertaining 1-1 draw. The result laid the groundwork for what was to develop throughout the season. 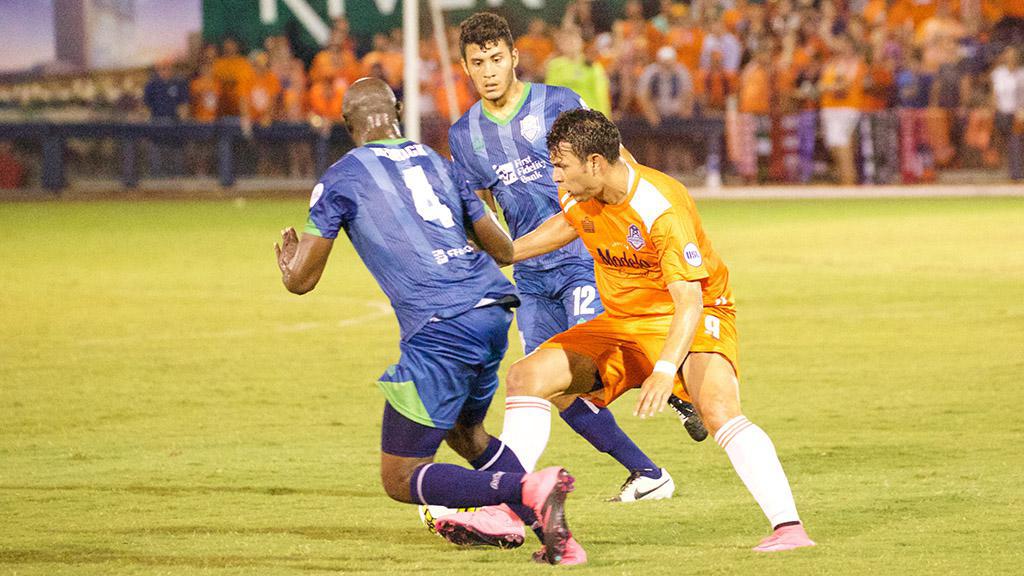 “There was a level of anticipation for the first game in Roughnecks history against Oklahoma City, a big rival,” said Roughnecks Head Coach David Irving. “It was a great crowd, a great night, and the result was a tie. From that standpoint, it was a great event.”

Though the first game was a great event, and a great preview of what the rest of the games between the two clubs would be like during the season, the rivalry was not yet officially the Black Gold Derby. Prior to the first game between the two clubs, and throughout the first several months of the season, members of both supporters’ groups met and discussed both an official name for the rivalry, and the creation of a trophy to be held by the supporters’ group of the club that won the season series. Collectively the groups gave the rivalry the designation of The Black Gold Derby, and adopted a four-foot wrench painted orange on one side, green on the other, with a blue stripe that wraps around the edge of the tool.

“We were working on a tifo one afternoon, and one person said, ‘Hey, what about The Black Gold whatever?’ We thought that is the perfect name,” said Bromley. “We went to Tapwerks [Ale House and Café] in downtown OKC and had a little bit of a beer summit. We talked it over and that was the name that we both thought was the best.

“We had no idea what they were going to bring to the table. While we brought the name The Black Gold Cup, which is what we were really pushing at first, they came to the table and said, ‘What if it’s not a traditional trophy. What if it was an object?’ We were really excited by that because we looked at custom trophies and said that we can’t afford a custom trophy. Then they said, ‘What if it’s a wrench?’ We’d already been carrying around smaller wrenches, and in the old Roughneck logo, a wrench was part of that, so we were all aboard for the wrench idea. We went to Harbor Freight and got the biggest wrench that we could find. It was already orange on one side, so they said that they would paint the other side green, and we called it a day.” 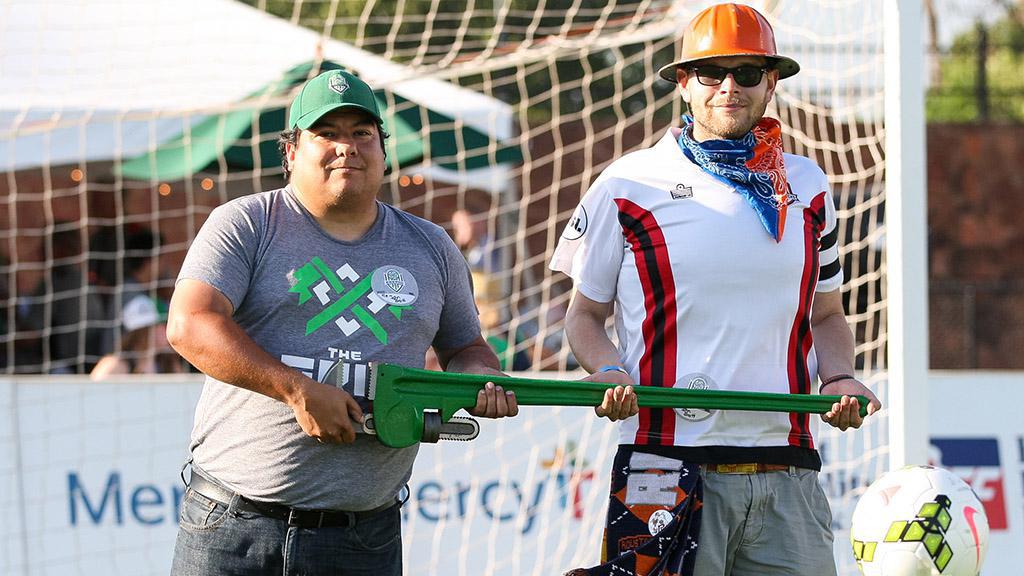 Over the course of the season, including an Open Cup game, the two Oklahoma clubs met five times, with each match proving more exciting than the past because of the stakes involved. By the time the fourth game of the series took place in July, Oklahoma City were in firm control of the series on points and only needed a draw to win the series.

Despite the Roughnecks going up 1-0 thanks to a Brady Ballew goal in the 49th minute, Energy FC battled back and earned a draw, clinching the Black and Gold Derby, and its iconic trophy, the wrench.

“It was awesome,” said Pugh. “It was glorious. It was actually even more fun, having clinched the wrench, going to Tulsa [for the last game of the series] with it. Being able to go to their stadium with the wrench and holding it up.”

After the fourth game of the season series, with Oklahoma City and The Grid already proudly in possession of the wrench, it seemed the final contest wouldn’t live up to the hype and results of the previous four affairs. Thanks to the banter between the two supporters’ groups, and the playoff implications for Tulsa, the contest was anything but dull.

“We got into the stadium before they did for the final match, and got into our section knowing that they come from their tailgate and enter the stadium in the gate that is by left-field, which is near the section that they put us in last season,” said Pugh. “So being able to be in the section and hold that wrench up as they marched into the stadium, because we knew that the first thing they would do is look at our section to see just how full it was, that was more glorious than winning it at home.”

While The Grid paraded around ONEOK Stadium with the wrench, The Roughnecks dispatched the Energy for the first time, 2-1, capping off the first of many Black Gold Derby series to come.

Heading into the first game of the 2016 Black Gold Derby, both teams and supporters’ groups are more than ready for the continued development of the rivalry.

“Rivalry matches are always important, on and off the field,” said Irving. “We’ve got good banter between the two supporters’ groups and the clubs, and I think that it’s healthy and that it needs to continue. It’s good for the sport. I think it’s great for the fans. They’ve been involved. OKC, they bring their fans here, The Grid, and when we go down there we bring a lot of fans as well, so I think that it’s healthy for both clubs.”

OKC enters the game in much better position than Tulsa in the USL’s Western Conference. Energy FC is coming off a thrilling 2-1 overtime Lamar Hunt U.S. Open Cup victory against Rayo OKC on Wednesday night, and is riding a seven-game unbeaten streak in league play. Meanwhile, Tulsa is struggling to find firm footing this season, and many view this first game of the 2016 Black Gold Derby as one that could potentially turn the club’s season around.

“It’s very significant,” said Irving. “There’s always the pressure of playing a rival down the road from you in Oklahoma City. It’s big. It’s a good game for us. It could turn our season around. We’ve had a tough start, 2-7-1, and it’s been a little difficult. That’s football. That’s life. It’s a big game Saturday, and there’s more significance because it’s Oklahoma City. It is always nice to win something, and we’re fighting for our fans, because they’re fighting for us.”

With it being a rivalry game, anything can happen, and that is something that everyone involved acknowledges. How the exactly this season’s series will play out remains to be seen, but one thing is for certain, both clubs and sets of supporters are ready to fight for the wrench on Saturday.

“A rivalry is a rivalry, and as much as I’d like to say that we’re going to clinch it this year, there is no telling on any given day, with as much animosity as there is between the two teams and the two supporters’ groups, anything can happen,” said Pugh. “That could be the motivation that Tulsa needs to get on their way this season and start picking up points instead of giving them out, but I just don’t see it happening. Not with the team that we’ve put together.

“As someone who put a lot of energy into making the derby come to life, it hurt [to lose], but it also means that I really want to bring it back,” said Bromley. “The wrench was purchased in Tulsa, and it needs to come back to Tulsa.”