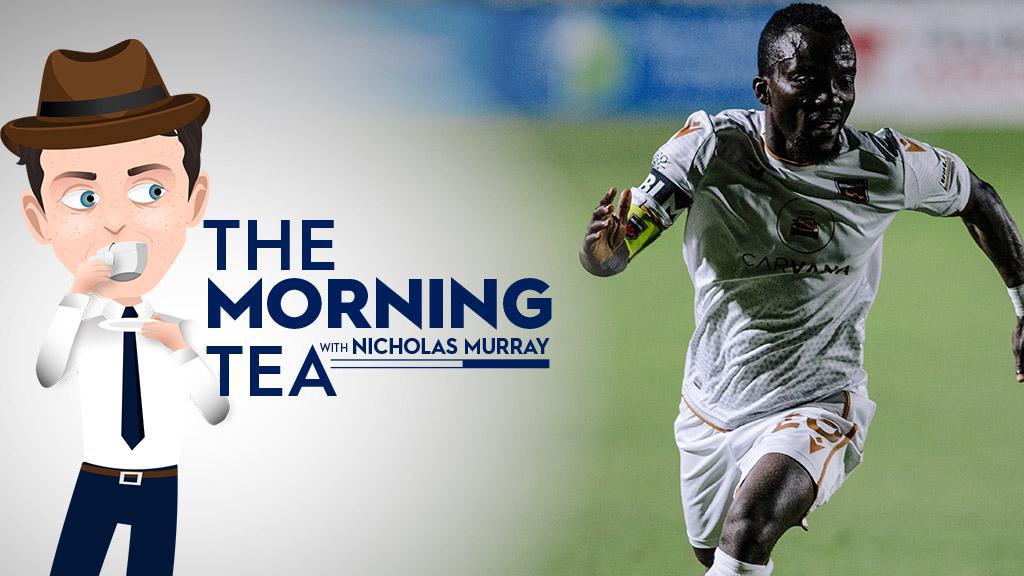 A busy night of action in the Championship produced some key results in the playoffs races in both conferences. The biggest story of the day, though, came from a player who has delivered time and again since arriving in the league two-and-a-half years ago.

CARSON, Calif. – It wasn’t a goal that will make many highlight reels in the future.

In fact, if not for its significance in the bigger picture, Solomon Asante’s goal in second-half stoppage time against the LA Galaxy II might have gone down as a footnote to comfortable 4-1 win for the visitors to Dignity Health Sports Park on Wednesday afternoon.

But as the goal that marked Asante’s 40th regular season tally in the Championship – arriving in just his 72nd regular season game in the league – it provided another landmark moment for the Ghanaian sensation that has burned brightly since arriving in Phoenix prior to the 2018 season.

Asante is only the second player in the Championship’s history to have recorded 40 goals and 30 assists in his career, joining Charlotte Eagles and Charlotte Independence legend Jorge Herrera in surpassing both marks. He picked up a pair of assists for good measure against Los Dos, moving him to 32 for his career in that category.

Seventy-two combined goals and assists in as many games? It’s a remarkable feat.

But for Rising FC Head Coach Rick Schantz, what Asante has brought to Arizona has been far greater than the numbers he’s produced on the field.

“He’s really transcended into a cornerstone of our club,” Schantz said before Wednesday’s game. “His professionalism, his leadership, being the captain, this guy does everything right, every day.”

From his conditioning, to his flexibility, to his leadership in the locker room, to the sense of joy he brings to the game, there’s plenty to admire. So too, his commitment to his family in Ghana, where he’s worked his daily routine of training and rest around also making sure he makes daily contact with home.

“He stays up into the wee hours of the night so he can talk to his kids,” said Schantz. “After training, he’ll sleep all afternoon and then he gets up at like seven or eight and stays up until two or three because he talks to his kids before they go to school.”

A season ago, Asante was a clear winner of the Championship’s MVP award, becoming only the second player to lead the league in goals and assists in the same year. This year, he may have competition for that title from his own locker room with Jamaican international Junior Flemmings making it nine goals in eight games with the opener against Los Dos to continue his own outstanding campaign.

But in Phoenix, there’s only one Solo, and he’s still the star that shines brightest in the desert sky.

“He’s just an amazing man, and he’s the reason why every year, when we add players or lose players, you look for guys that have his character and treat the game the way that Solomon Asante does,” said Schantz. “He’s been a major, major impact on our organization, and I think that as well as everyone else is doing, we can never, ever overlook the impact that Solo has on this team. He’s clearly the most important guy.”

- The Charleston Battery retained the Southern Derby trophy on Wednesday night in an impressive 3-0 victory on the road against North Carolina FC. Live 5 News’ has coverage of the night, which provided another sizeable boost the club’s postseason chances.

- The battle for second place in Group D remained as tight as when the day began, meanwhile, as FC Tulsa and Austin Bold FC played to a 2-2 draw at ONEOK Field. The Tulsa World’s Barry Lewis saw Dario Suarez star for the hosts with a goal and assist, but those efforts come up short of a win against a solid Bold FC squad.

- Loudoun United FC suffered a 2-0 defeat to Pittsburgh Riverhounds SC on Wednesday night in its home opener at Segra Field. Despite that, according to the Washington Post’s Steven Goff, as the club became the first in the Washington, D.C. area to welcome fans since the start of the COVID-19 pandemic, it felt like a win.

- For Riverhounds SC, though, its victory was a welcome return to form as the side moved back on top of Group F in the Championship. Pittsburgh Soccer Now’s John Krysinsky has the details on how a strong start set the stage for another positive result for the Hounds.

- Louisville City FC gave more evidence its season is turned in the right direction as it put together its best attacking night of the season so far in a 4-1 win against Sporting Kansas City II. The Louisville Courier-Journal’s Dominique Yates has more on the resurgent attacking display the hosts put on at Lynn Stadium.

- New Mexico United had changes in its lineup, but it was a familiar face at Zions Bank Stadium that proved key as Kalen Ryden scored United’s first goal against former club Real Monarchs SLC in a 2-0 victory on the road. The Albuquerque Journal’s Geoff Grammar took a look at how positive the playoff picture looks now for United, which extended its lead at the top of Group.